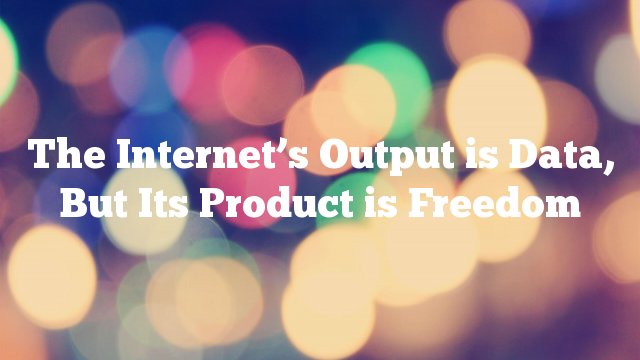 The Internet’s Output is Data, But Its Product is Freedom

I said that in a personal discussion with a friend, and he replied:

There are assertions of verifiable fact and then there are invocations of shared values. Don’t mix them up.

I meant this as an assertion of fact, but re-reading it after my friend’s feedback, it comes off as simple flag-waving, since I’d compressed the technical part of the argument out of existence. So here it is again, in slightly longer form:

The internet’s essential operation is to encode and transmit data from sender to receiver. In 1969, this was not a new capability; we’d had networks that did this in since the telegraph, at the day of the internet’s launch, we had a phone network that was nearly a hundred years old, alongside more specialized networks for things like telexes and wire-services for photographs.

Thus the basics of what the internet did (and does) isn’t enough to explain its spread; what is it for has to be accounted for by looking at the difference between it and the other data-transfer networks of the day.

The principal difference between older networks and the internet (ARPAnet, at its birth) is the end-to-end principle, which says, roughly, “The best way to design a network is to allow the sender and receiver to decide what the data means, without asking the intervening network to interpret the data.” The original expression of this idea is from the Saltzer and Clark paper End-to-End Arguments in System Design; the same argument is explained in other terms in Isenberg’s Stupid Network and Searls and Weinberger’s World of Ends.

What the internet is for, in other words, what made it worth adopting in a world already well provisioned with other networks, was that the sender and receiver didn’t have to ask for either help or permission before inventing a new kind of message. The core virtue of the internet was a huge increase in the technical freedom of all of its participating nodes, a freedom that has been translated into productive and intellectual freedoms for its users.

As another of my friends put it, the Internet means you don’t have to convince anyone else that something is a good idea before trying it. The upshot is that the internet’s output is data, but its product is freedom.

Hey, I'm Grant. I'm a tech enthusiast and have been featured in various online publications. I love web design and working with people.